Why Have Prospects Stopped Submitting Contact Info on Lead Forms? And What Can You Do about It? 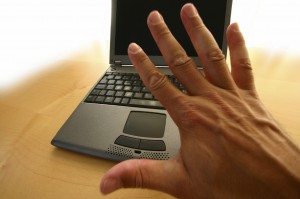 Symptoms of the decline: Over the past four months we’ve noticed a pronounced trend: prospect lead form submissions are declining in raw numbers and in percentages of clicks-to-submissions. Yet other forms of campaign measurement, such as inbound calls and web activity, are rising. We’ve noticed this in the context of several different campaign types and companies, so we’re convinced it isn’t a trend restricted to one type of campaign or industry.

For example, we recently helped a client create a banner ad campaign that ran on multiple web properties. The clicks exceeded any other banner ad campaign we’ve run on same properties and for similar offers. However the submission of prospect information to lead forms were subpar. The client was left scratching their heads, until they discovered a radical spike in traffic on the product pages on the corporate website, which coincided with this campaign. They wondered if there were any other factors causing this anonymous web traffic, such as a press release or trade show. After investigating, the client formulated the conclusion that the banner ad campaign was the main, if not the only reason for the spike in web traffic.

For another client, we ran a three-month pay-per-click (PPC) advertising campaign directing prospects to fill out a form to receive further information. The average cost-per-click was acceptable and overall volume of clicks was on target. However the percentage of lead forms submitted were below industry metrics. We tweaked the form page several different ways, hoping to increase the form submission rate, but nothing seemed to move the needle. We were getting discouraged until we received the call center report and realized that 800# call traffic had gone through the roof during the period of this PPC campaign. We searched for whether there could have been any other reason for this increase (besides the PPC campaign) and we could find none. Our only possible conclusion was that the PPC campaign drove the significant phone traffic.

Four theories on why: Several other oddities in campaign performance over the last quarter lead me to conjecture about what is happening. Why are prospects failing to fill in their contact information on lead forms? I have four theories:

1)    They don’t want a salesperson calling them, so they don’t fill out the form. People suspect that the minute they fill out a registration page form, a salesperson targets their backs. And they’re probably right. Prospects increasingly want to dictate the time and terms of when they have a conversation with sales. They may form an interest in your product due to your campaign, but rather than fill out the lead form, they visit the website or call a sales 800# to get more information. Tip: Use track-able 800#s on your marketing campaigns, so you can attribute from which campaign a lead is coming.

3)    They want to research on their own.  Prospects are taking more control of their information gathering. Instead of responding directly to your campaign, they may instead go to the website or social media to do initial research. Or they may pick up the phone and call you. All of which are good things, but we need to offer good organization and content on the website. Tip: Install an anonymous website visitor tracking system, which will allow you to see from which company IP addresses visitors are coming. Sales can then target those companies in future outreaches.

4)    They are looking for better or different content. Prospects are getting more demanding about the quality and objectivity of the information you provide. They may also be looking for shorter or more in-depth content, depending where they are in their product purchase process. Tip: Provide a variety of content in a multitude of formats. It should be content that suits every phase of the decision process, from short demos to in-depth guides and application notes.

As we lose control of the prospect product research process, we need to provide more convenient, user-friendly ways for them to gather information, talk to the sales department, and evaluate your product on THEIR terms. This means campaign planning involves a lot more than just having a landing registration page form ready when we launch the campaign. We need to make sure all of our ducks are in a row, including an excellent website experience, a variety of well-developed content, and convenient access to speak with a sales rep.

This blog was authored by Laurie B. Beasley, co-founder and president of Beasley Direct Marketing, Inc. Beasley Direct is a Silicon Valley direct marketing agency that has managed search, email, online, and demand generation campaigns for nearly 100 companies. Ms. Beasley serves as President of the Direct Marketing Association of Northern CaliforniaDMAnc.org. She manages the eMarketing Roundtable for the BMA Northern Californiawww.NorCalBMA.org. She is also an instructor of online marketing at UC Berkeley Extension and teaches for the Online Marketing Institutewww.onlinemarketinginstitute.org. Ms. Beasley frequently speaks on online marketing and demand generation topics for marketing organizations, including the DMA, BMA, AMA, Tech Council, and the Online Marketing Summit.