How We Beat Lead Goals by 1,000% and Won an Award for Anritsu with a Meeting Maker Campaign 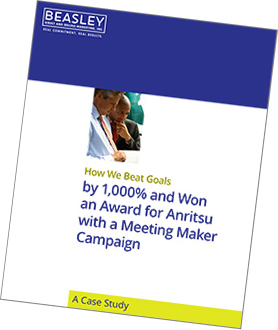 Read this sales lead generation case study to learn about a successful meeting maker campaign that includes an appeal to the client’s need for speed and compact size, multiple touches, and a carefully designed offer. The call to action was to set up an appointment for Sales.

Anritsu is a leader in electronic instruments used by the wireless industry to test and troubleshoot cellular tower transmission lines and base station transmitters. However, Anritsu had been unable to penetrate the executive suite at top cell phone companies because competitors were strongly entrenched. We had to convince decision makers our instrument was so much faster, more accurate and more compact that they would buy it next time they needed a base station analyzer. But before we could do this, we had to get their undivided attention.

We did this through the use of a very engaging dimensional direct mail campaign, email touches, capped off with a high-end lead development tele-prospecting campaign to schedule appointments for the Sales team. We exceeded the lead goal by 1,000%! Plus we won two awards for the campaign. Read the case study to find out how we did it.

Just complete the information below for instant access to your free copy of our case study How We Beat Lead Goals by 1,000% and Won an Award for Anritsu with a Meeting Maker Campaign.