How We Helped a Network Storage Company Blow Past Lead Gen Goals with a Multi-Touch, High Impact Campaign 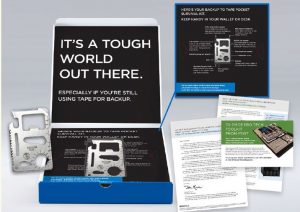 Our client was a Fortune 500 company specializing in network storage. The target audience was executives in large organizations who buy or specify backup storage solutions to secure enterprise data and restore it if necessary. Much of the audience still uses backup-to-tape, a slow but dependable process which has been around since the early 1990s. We wanted to convince them to learn about our client’s backup-to-cloud solution and become sufficiently interested that they would agree to a demo.

Our approach was to talk about “surviving backup to tape” and focus on all the challenges that might make life difficult for the manager using that solution. A dimensional box teased “Pocket Survival Kit Enclosed” with the subhead: “Are you still using tape for backup? Then you’ll need this.” Inside, the prospect found a credit card-size pocket tool with screwdriver, bottle opener and similar capabilities. The gadget was mounted on a shelf with callouts to the functions that tied them to the hazards of tape backup.

Right after the direct mail arrived, we also dropped and email campaign and embarked on a series of follow-up calls with the objective of completing a sales prospecting script through one or multiple call touches. This is a process by which the value proposition is presented, needs and pains are discussed, and the prospect either qualifies and schedules a demo or is confirmed to be unqualified or not interested. If the prospect is busy or not reached, the rep calls back. Several metrics gave us early proof we had a hit on our hands:

Anecdotally, the telephone reps told us the people they talked to were highly engaged, remembered the direct mail and offer, and were eager to talk about it. They found the “Ultimate IT Geek’s Toolkit” an appealing reward for their time in taking the demo, and they appreciated the research we had made to match the premium (a set of jewelers-quality tools used for tinkering with electronics) to their interests.

Results: at the five-month mark, two hundred and thirty demos had been scheduled vs plan of 42—a 5x improvement over our goal. Beasley’s involvement ends here, since our assignment was to deliver a sales-ready lead to the client’s reseller network. Based on conservative estimates and extensive previous experience with similar campaigns, we project a sales-to-cost ratio of $4.62 in revenue for every dollar invested. By any measure, the campaign is an outstanding success.

How can our direct mail experts help your next campaign succeed? Call and speak with us today.